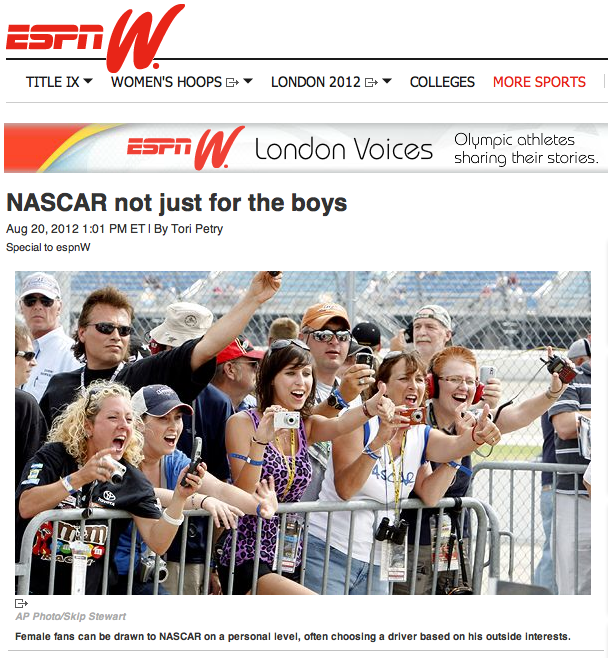 It sounds like a foreign language to those outside of the world of stock car racing, but to 75 million NASCAR fans, it’s their native tongue.

Surprisingly, men aren’t the only ones who speak this language. In fact, 40 percent of the NASCAR fan base is female. And they have no problem keeping up with the boys when it comes to talking about racing.

“I know every driver, what kind of car they drive, I know what restrictor plates are … There’s not much I don’t know,” said Sandy Ebersohl, who has been a NASCAR fan since her dad taught her about the sport growing up. “I’d challenge a man to NASCAR trivia anytime.”

Ebersohl is just one of the millions of women drawn to the sport that revolves around cars, a realm that has stereotypically belonged to men. And while some women are first reeled into NASCAR through the influence of a man, like a father or husband, they are quick to say they have not needed a man to keep their love for NASCAR burning.

“I’ve had boyfriends who don’t like it,” said LaMysa Foster, a NASCAR fan from Atlanta. “We had problems.”

“In my house, I’m the only NASCAR fan,” Teann McCrea said. “My husband watches because of me.”

When you ask a female NASCAR fan what makes her love the sport, it’s rare that the answer includes the brunette in the lime green GoDaddy.com Chevy. And no, it’s not all about good-looking men in fire suits, either. The responses are deeper than even Kasey Kahne’s blue eyes.

The fans, without hesitation, begin with the thrill of the speed.

In what some people see as a three-hour glorification of boring and uneventful left turns, these women see an edge-of-your-seat unpredictability and nerve-racking risk. They see cars going 200 mph, running three-wide with just inches between them.

To these female fans, the sound of impact wrenches on pit road and the sight of thousands of other fans wildly waving Dale Earnhardt Jr. across the start-finish line are far more entertaining than watching Emily Maynard choose Jef Holm on “The Bachelorette.” Seeing their favorite drivers dominate is second to none.

Whether it’s the bad boys like Tony Stewart or the good guys like Carl Edwards, these drivers certainly draw female fans. The unique quality of NASCAR fandom is that rather than rooting for a team, like in most mainstream sports, fans root for an individual. Choosing a favorite driver is often a different process than picking a favorite MLB or college football team. It is less about allegiance to a geographical area and more about rooting for a personality.

“You can find your favorite driver based on your passions,” said Ginny Colsey, who is a Ryan Newman fan because they both share a love for animal rescue.

Anita Fisher chose Jeff Gordon as her driver because of his values. “He’s a great family man and he has cute kids,” she said. “Me, my husband and my kids — we all have different drivers.”

Women tend to gravitate to the stories and emotions inside sports, so it makes sense that the unique qualities of drivers endear them to the ladies in the stands. After the fast cars and high speeds draw them in, the feeling of connecting with a driver on a personal level makes them stay.

The sanctioning bodies of NASCAR seem to have picked up on it. The personal fan-to-driver experience provided at a NASCAR track is unparalleled among other professional sports. Fans have the option to buy pit passes, tickets that get them onto pit road and into the garages — the equivalent of permission to stand on the sideline with Bill Belichick and Tom Brady just before kickoff. Even fans without tickets are admitted to the track “Fan Zone,” where drivers often make appearances at their sponsor or manufacturer booths.

Plus, when it comes to women with families, NASCAR is hard to beat. Although concessions are offered, fans at NASCAR races are able to bring their own food and drinks into the track, providing a cheaper alternative to the $10 hot dogs and $6 sodas that can add up when bringing a family of five. “It’s economical,” Fisher said. “It’s easy to bring the whole family.”

For many women, sharing NASCAR with the family is the best part. “I couldn’t wait for my son to be old enough for me to bring him,” Foster said.

For Ebersohl and her 5-year-old daughter, Courtney, race weekend is girls’ weekend.

“We get to spend the whole day together,” she said of bringing Courtney to several races a year. “And on Sundays at home, we watch the race together.”

Even the adults see NASCAR as a bonding point with their parents.

“Growing up, we watched NASCAR every Sunday with the family,” McCrea said. Although her father has died, there’s still something special to her about the sport. “It makes me feel closer to him.”

NASCAR is particularly rooted in family. An affection for stock car racing is rarely stumbled upon. Rather, it is inherited. Dale Jr. followed in the footsteps of his father; Lee, Richard, Kyle and Adam gave NASCAR four generations of Pettys; and the Busch brothers rub metal on the track every weekend. Even the broadcast box feels the family ties — Ned Jarrett called his son Dale to the checkered flag at the Daytona 500 in 1993, and Darrell Waltrip cried in the TV booth watching his little brother Michael win the same race in 2001. Likewise, the privilege of NASCAR fandom is an heirloom passed on with instructions to care for with fondness and full-hearted devotion.

Sure, women can keep up with the boys when it comes to talking cars. But for these ladies, the language of NASCAR encompasses even more — it’s the bonds, the thrills and the culture of racing that keeps them fluent in motorsports.

And they’ll be sure to pass on the legacy.

Tori wrote this article for espnW during her internship with ESPN. She worked in event production, but interviewed women at NASCAR races and wrote the story in her free time. It was published on the home page of both espnW and ESPN NASCAR.